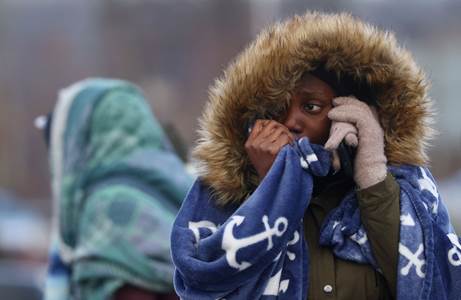 (TriceEdneyWire.com) — Haddy Gassama and Rev. Trena Turner said since Russia invaded Ukraine late last month, they have been saddened and touched deeply by the human toll, the misery and the unnecessary nature of this war.

But of equal concern, the activists said, are revelations that Black students and residents have been the targets of racism and discrimination even as more than a million people have fled the approaching Russian military juggernaut.

“I found out about this a couple of days ago, but I knew well in advance that there were Black migrants and students from around the world there. Was I surprised? No, of course not,” said Gassama, UndocuBlack’s national director of policy and advocacy. “It’s so unfortunate, so disappointing, but Black people tend to bear the brunt of cruelty. I have heard that it’s not Polish border guards but Ukrainian border patrols doing this.”

“People are fleeing a war but still find time to be racist.”

In the days after Ukrainians realized that they were involved in a full-scale war and their country confronted by a powerful and ruthless army, increasing numbers of men, women and child began have sought refuge in neighboring countries including Poland, Hungary, Moldova and Romania. According to the United Nations, 1.5 million people have left Ukraine for safety elsewhere in the last 10 days. It is the fastest growing displacement in a European country since World War II.

By contrast, under the hashtag #AfricansinUkraine, social media sites, news outlets and other entities have been deluged with personal stories via videos, cellphone footage and interviews with Black Africans, Black Ukrainians and international students from Nigeria, Ghana, India, Morocco showing the racism, discrimination and hostility they’ve faced. They spoke of the double standard of White Ukrainians getting preference over Black, South Asian and Mediterranean people and their studied pushback against the perpetrators.

Black and Brown men and women have been forced off trains and buses. Others have been verbally and physically abused, and still more have been refused entry in Poland by Ukrainian security forces and border guards.

Foreign students tell of having walked scores and sometimes hundreds of miles from where they were living to try to reach the border after being turned away at train stations, bus depots checkpoints and at border crossings. Some say they were forced either out of lines or told to go to the back after being told that only White Ukrainians would be accommodated. There are also scattered stories of Black people being beaten and threatened with weapons and refused entry into Poland by border guards. And all of this has been playing out in the midst, not just of a bloody conflict, but also freezing winter weather with the Black students and residents enduring winter temperatures with little or no food, water, or blankets.

Representatives of civil rights organizations, civil society, professionals and others disgusted with what they’ve seen have been vocal in their opposition and have responded by starting crowdfunding projects on Instagram and other social media to support beleaguered students.  Students are stranded in Ukraine because flights out of the country are grounded, leaving African governments unable to fly students from their countries out of the war zone.

France, 24, said some Africans have left Ukraine. A reporter spoke to several students last weekend at Lviv train station in western Ukraine who explained that they were turned back by Ukrainian border guards while attempting to cross into Poland.

“They stopped us at the border and told us that Blacks were not allowed. But we could see White people going through,” said Moustapha Bagui Sylla, a student from Guinea. Sylla said as soon as bombing began in Kharviv, Ukraine’s second-largest city, he left his university residence.

Andriy Demchenko, a spokesman for the Ukrainian Border Guards, told CNN that allegations of segregation at the borders are untrue and that the guards are working under enormous pressure at the borders—but are working within the law.

“There is absolutely no division by nation, citizenship, or class at the border,” he said.

Rev. Trena Turner, a Sacramento, California resident said she, like most Americans, sided with Ukraine which she describes as the country being the victim of a brutal unprovoked attack. But as the images and stories of how badly Black people have been treated hit the social media and the airwaves, she said she feels conflicted.

“I was so disheartened as I watched the newsreel and heard the voice of one young woman saying that they came into Ukraine, accepted and were granted homes and jobs. But since the conflict started, they noticed a marked difference such as having to wait in tough, stressful and demanding conditions,” said Turner, a pastor at Victory of Praise Church in Stockton, California. “Darker complected people have been treated differently. When the person being interviewed explained what was going on, the interviewer just said ‘thanks’ and didn’t pursue it.

“It’s a worldwide crisis but we always seem to be the underdog, are expendable. We can’t just be myopic about what’s going on here. We have to avoid distractions and turn this into a fight of Black bodies globally.”

The issue is so concerning that the African Union, the NAACP, a coalition of Black lawyers led by Ben Crump and the United Nations have each commented on and condemned the treatment meted out to these international students. Crump and his colleagues filed an urgent appeal to the United Nations this week on behalf of African refugees facing racial discrimination in Ukraine and Poland. Meanwhile, NAACP President Derrick Johnson said on Twitter that his organization is working with the Congressional Black Caucus, civil rights organizations, and international partner organizations “to ensure the safety of Africans seeking refuge amid the crisis in Ukraine.”

A wide cross-section of critics have vociferously condemned the blatant racism, demanding that border guards and security forces respect the human rights of Black and Brown people be respected and give students safe passage without the spectre of a racist double standard determining who gets into another country hanging over the process.

According to the BBC, government data from 2020 shows that Ukraine was home to more than 76,000 international students, with about 25% of them coming from Africa (Nigeria, Morocco and Egypt). India accounts for 20,000 students, most of whom are studying engineering, business and medicine. A degree from one of Ukraine’s universities is affordable, provides access to the European job market and visas as well as opportunities to secure permanent residency.

Filmmaker, journalist, and physician Ahmed Twaij’s May 3 column on NBC News’ website said “the atrocities in Ukraine have garnered widespread coverage across the globe. But this reporting has unsheathed the flagrant racist and biased attitudes toward the value (or the lack thereof) of non-European life.”

West has always prized White lives over non-White men, women and children dying in wars outside Europe, Twaij said. He was particularly critical of listening to Western anchors and journalists expressing shock, “as if bloodshed is exclusive to Black and Brown communities.”

Twaij cites a Ukrainian official, who told a reporter on BBC: “It’s very emotional for me because I see European people with blonde hair, blue eyes being killed, children being killed every day with Putin’s missiles.” He said it’s not new that the West trivializes war in the Middle East and dehumanizes the entire population. He added that the problem is exacerbated because journalism is plagued with representation issues around the world.

He said 40% of the population in America is non-White, but a 2020 Reuters Institute study looking at 10 top online news outlets and 10 top offline news outlets that found only 11% of top editors are non-White.

“We need to do better and combat this racism,” Twaij said. “No life is worth more than another.”