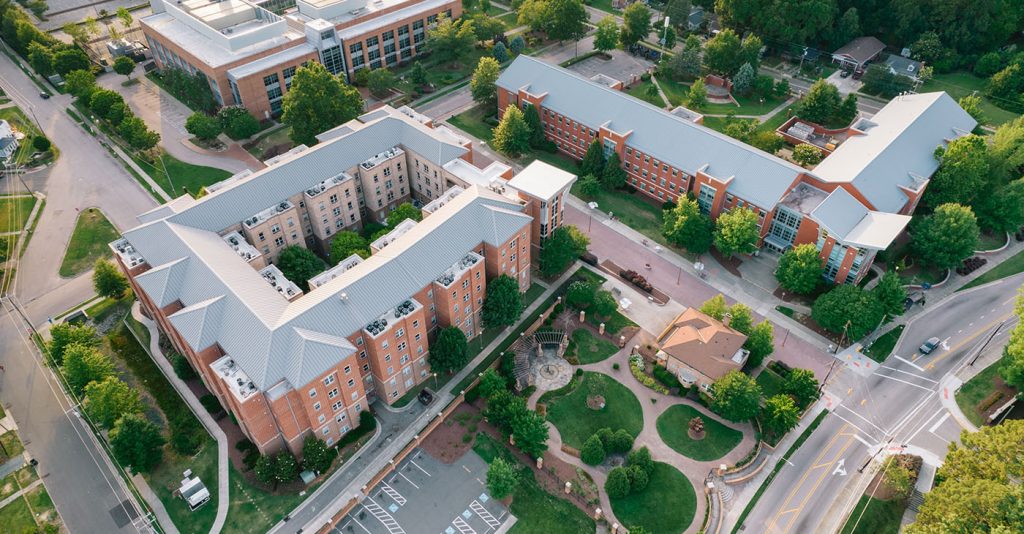 Aerial view of North Carolina University’s campus. The university was one of at least seven bomb threats reported in early January at Historically Black Colleges and Universities around the country.

Shifting funds from the Department of Education to assist Historically Black Colleges and Universities experiencing sporadic bomb threats, several top officials in the Biden Administration spoke out. Over the last two months, repeated bomb threats have been made against several HBCUs including Morgan State, and Howard University.

On March 16, in a small auditorium at the Old Executive Office Building next door to The White House, Vice President Kamala Harris, Secretary of Education Miguel Cardona, and Attorney General Merrick Garland spoke on the plan. The allocations, coming from existing money from the Department of Education budget, comes to about $150,000 per school.

HBCUs have received a record amount of funding from the federal government over the last year into the billions.

“At the Justice Department, we believe the time to address illegal threats is when they are made, not after tragedy strikes. We also know that the threat against HBCUs and their students have deep, historical roots. In the over 150 years since the founding of the Department, the threats posed by hate-fueled criminal acts have taken on many different forms. But our task remains the same: to use our resources and our legal authorities to prevent and confront bias-motivated violence and threats of violence,” the Attorney General said in front of education officials, reporters, and supporters of HBCUs.

“If you look at our Administration, if you look at what we’re doing we’re making sure we empower our universities. They’ve done great with less for far too long,” Richmond said standing in the White House driveway.

Members of the CBC received a briefing on the bomb threats from Department of Justice officials in early March. In an era of divisive politics and former President Donald Trump who negatively openly targeted Black members of Congress and cities with large Black populations such as Baltimore and Philadelphia, concerns for HBCUs have remained high.

“The threats made against our nation’s Historically Black Colleges and Universities are far from new, and I commend the Administration for finally allocating the necessary attention and resources to HBCUs as we work to end the string of threats and bring the perpetrators to justice,” said Rep. Frederica Wilson in a statement.

“Our administration is sending a very clear message that intimidation will not stand and we will not be intimidated. We will do everything in our power to protect all our communities from violence and from hate,” said Vice President Harris.

(Lauren Victoria Burke is an independent journalist and the host of the podcast BURKEFILE. She is a political analyst who appears regularly on #RolandMartinUnfiltered. She may be contacted at <LBurke007@gmail.com> and on Twitter at @LVBurke.)