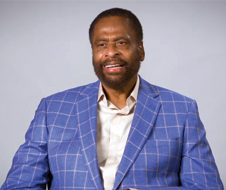 Former NBA basketball player and Coach Don Chaney, shared his personal story of being diagnosed and living with hereditary ATTR-CM.

Pfizer in collaboration with cardiologist Dr. Don Rowe presented a town hall, ‘Listen to Your Heart: Raising Awareness of a Serious Heart Condition in African American, Black, and Afro-Caribbean Communities,’ on March 26.

The event was moderated by local pastor, Cornelius Hill.

As part of the ‘Voices for the Heart’ effort, Rowe and former NBA basketball player and coach Don Chaney, a hereditary ATTR-CM patient himself, were the featured speakers at virtual town hall.

The discussion centered around bringing awareness to Transthyretin Amyloid Cardiomyopathy, or ATTR-CM. ATTR-CM is a serious and often underdiagnosed cause of heart failure.

“African Americans have a 50% higher chance of developing congestive heart failure than all other ethnic and racial groups,” said Dr. Rowe. “While heart failure is common among Black, African American, and Afro-Caribbean communities, hereditary ATTR-CM in these populations is often overlooked by doctors for several reasons. In fact, some patients with ATTR-CM say they visited up to five doctors before receiving an accurate diagnosis.”

ATTR-CM is a progressive disease, in which over time the heart muscle begins to thicken and stiffen. There are two types of ATTR-CM: the wild-type, which is associated with aging; and the hereditary type, which is associated with a gene change (mutation) and can be passed down from a relative. The most common mutation in the United States, known as V122I, is found almost exclusively in African Americans. Approximately three-to-four percent of African Americans are thought to have the V122I mutation, although not all individuals with the V122I mutation develop symptoms of hereditary ATTR-CM.

Former Coach and NBA player Don Chaney who was diagnosed with ATTR-CM a few years ago says that he is committed to bringing awareness especially in AA community.

“In 2019 I was caught off guard with my condition,” said Chaney. “It went undiagnosed for a long time.”

According to Chaney, he started experiencing frequent symptoms, despite living a healthy lifestyle.

Even though my mother and grandmother died of heart disease, I started experiencing symptoms like carpal tunnel syndrome, pain and swelling in knees and feet, but never made the connection to heart disease.”

With time, Chaney was later diagnosed with heart failure, but still didn’t know that he had a rare heart condition

“Like many people and even some doctors, I was complete unaware of ATTR-CM,” said Chaney.

According to Dr. Rowe, some of the symptoms are not traditionally associated with heart disease, which may contribute to multiple doctors’ appointments and a delayed or incorrect diagnosis.

“Once diagnosed, genetic testing and counseling is important to determine which family members are at risk,” said Rowe. “It is under-diagnosed and under recognized, so not only patients need to learn more about ATTR-CM, but also providers.

Faithful utterances
What’s in your harvest?