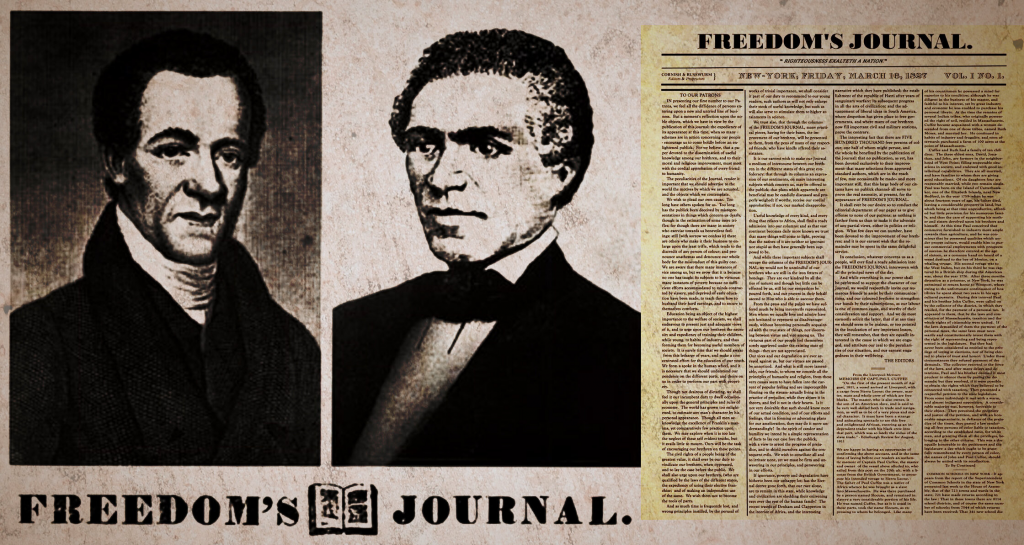 Today, in 2022, the Black Press remains the vital source of news and information for 50 million African Americans. Samuel E. Cornish and John B. Russwurm, founders of Freedom’s Journal, the first Black newspaper in the U.S. (photo courtesy of the Los Angeles Sentinel)

On March 16, 1827, Samuel E. Cornish and John B. Russwurm founded the first Black-owned newspaper in the U.S.

They did so because there were no Black voices in the debate over the abolition of slavery.

In their first editorial, Cornish and Russwurm wrote: “In short, whatever concerns us as a people, will ever find a ready admission into the Freedom’s Journal.”

“One hundred and ninety-five years later, the mission of the Black Press has not changed,” Washington Informer Publisher Denise Rolark Barnes wrote in an editorial.

“No matter whether Black Press journalists are invited to a seat at ‘their’ table, the voices of those the Black Press represents will always have a seat at ours,” Rolark Barnes wrote.

From Freedom’s Journal to the North Star to John Abbott’s Chicago Defender, African American-owned newspapers have sparked fires for truth and equality that have burned with the passion of fighting for freedom throughout history.

March 16, marked the 195th anniversary of the Black Press of America, whose global impact remains undeniable. It all began with Freedom’s Journal.

On March 16, 1827, they announced its presence with a front page that contained these words:

“We wish to plead our own cause. Too long have others spoken for us.”

The 4-page edition included stories about the struggle to end the horrors of slavery, lynching, and social injustice.

It also informed the African American community of international news of particular interest like Haiti and Sierra Leone events.

The bond between Black America and the Black Press remains strong.

“Relationships, which have been the cornerstone of the Black community and the Black Press for 195 years, have always been its messenger in cementing that bond,” remarked Westside Gazette Publisher Bobby Henry.

Dr. Toni Draper, the publisher of the 130-year-old AFRO in Baltimore and Washington, also noted the enduring value of the Black Press.

“The contribution of the Black Press is invaluable. If not for the Black Press, there would be a lot of things we would not have documented in terms of the African American experience,” Dr. Draper said.

“The Black Press was founded in 1827, and African Americans were not in any of the pages of the White-owned press unless there was an advertisement of our sale, of our resale, or us having run away from slave owners or plantations.

Douglass, who helped enslaved people escape to the North while working with the Underground Railroad, established the abolitionist paper, The North Star, in Rochester, New York. He developed it into the most influential Black antislavery newspaper published during the Antebellum era.

The North Star denounced slavery and fought for the emancipation of women and other oppressed groups with a motto of “Right is of no Sex; Truth is of no Color; God is the Father of us all, and we are all brethren.”

Today, the Black Press continues to reach across the ocean where possible to forge coalitions with the growing number of websites and special publications that cover Africa daily from on the continent.

“The spirit of Black journalism, which Russwurm and Cornish inspired, found its way to Houston 128 years later through a vision given to a local Black businessman to birth a newspaper that positively reflected the Black community, while also reporting the hard truths happening in our communities on the local, state, and national level,” Houston Forward Times Associate Editor Jeffrey Boney said.

The evolution of the Black Press, the oldest Black business in America, had proprietors take on issues of chattel slavery in the 19th century, Jim Crow segregation and lynching, the great northern migration, the Civil Rights Movement, the transformation from the printing press to the digital age and computerized communication.

With the Plessy vs. Ferguson Supreme Court ruling that said no Black man has any rights that a White man must honor, there came a ﬂood of Black publications to advocate for Black rights and protest the wrongs done to Blacks.

Today, the Black Press continues to tackle domestic and global issues, including the coronavirus pandemic and its effects on all citizens, particularly African Americans.

“This is an important story about the history of the Black Press of America that has consistently been the freedom fighting voice of African people in America and throughout the world for 195 years without waiver or distortion of the truth,” stated NNPA President/CEO Dr. Benjamin F. Chavis, Jr.

“Today, in 2022, the Black Press remains the vital source of news and information for 50 million African Americans. On this momentous anniversary, the NNPA salutes all the African American-owned newspapers and media companies that are affiliated with the NNPA’s expanding network of over 230 media properties and channels.”