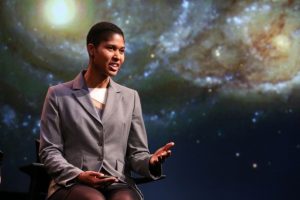 Climate change is real and impacts all Americans, especially Black Americans and other communities of color. Environmental experts such as the Environmental Defense Fund (EDF) note that many Black Americans are more vulnerable than others to severe weather and floods due to where they live. Climate change also makes air pollution worse, and polluted air is especially harmful for Blacks with breathing issues such as asthma.

Counties with large Black populations are already exposed to extreme temperatures two to three more days per year than those counties with smaller Black populations. A 2021 Environmental Protection Agency report found that Black people were 40% more likely to live in areas that will experience the highest increases in extreme heat deaths.

A team of U.S.- and U.K.-based researchers recently wrote in the journal Nature Climate Change that “future predominantly Black communities will be the worst hit” as the U.S. faces a 26% increase in flood risk within the next 30 years.

Dr. Danielle Wood directs M.I.T.’s Space Enabled Research Group and is the first Black woman to hold the position. Wood, who was recently in town, said that her laboratory is finding ways to use space-age technologies in combating climate change.

A noted expert in her field, Wood has published extensive research on emerging space activity in Africa, Latin America and South East Asia and has advised U.S. government senior leaders on technology policy.

Wood spoke at the Westminster Town Hall Forum’s Spring 2022 event on March 11. “I’ve traveled to many countries, particularly in Africa,” Wood told the audience. “There’s a myth that says some countries can’t afford to have a space program. I’m here to tell you it’s not true.

“These days, countries around the world have small satellite programs. I’ve been a part of teams that have learned about these programs, particularly in countries in Africa—Kenya and Ghana for example.”

An assistant professor in media arts and sciences, Wood holds a joint appointment at MIT’s aeronautics and astronautics department as well as being the faculty lead for Africa and African Diaspora Studies at her alma mater. She also has designed satellites and space technology applications that contribute to sustainable development.

Before her talk, she told the MSR: “I have two classes that focus on the topic of how space plays a role in our society and how it can or should be used to help people around the world. We’re interested in sustainability both on Earth as well as beyond Earth.”

“We should ask the question in what way are we [who are] living in inner cities experiencing some particularly harmful versions [of] climate change. In areas that are heavily populated with people in buildings in urban areas, they experience greater heat compared to a more rural area with lots of trees.

“There’s lots of science showing that some areas that are likely to have high populations of people of color or low-income people. They’re often sited near areas of poor waste management or water management or poor air quality.”

Wood told the Westminster Town Hall audience that a high school teacher first got her involved in studying space: “I was a student with a lot of good grades in high school, and I wasn’t sure what direction I would go in,” she said. “My teacher asked me to apply for a program at NASA when I was 17.

“If I hadn’t had that teacher suggest this idea, I probably would not be here today. I wasn’t thinking about a space career until someone suggested that I consider it. We can use satellites to track areas of higher heat and other environmental factors on Earth, especially in urban areas,” Wood said. She and her MIT students are also studying beeswax as a possible source for energy fuel. “Space actually belongs to all humankind,” Wood said.

But back to Earth, Wood pointed out that her travels around the world have convinced her that climate change is real. “There are some countries around the world that have asked if they need to actually relocate major cities or capitals because there’s been a concern about climate change. A multifaceted approach involving all levels of government, as well as residents coming together to address climate change, is needed.” She discovered that something as simple as planting more gardens in urban areas can be a good start.

“One of the things I learned from the [National] Audubon Society is to support birds. Birds are a good example of weather,” Wood told the MSR. “As a result, [learn] what are the natural native plants [and] put some in the area, even if it’s in small pots or in a small park if possible, and that attracts birds that leads to a healthy cycle of plants and birds and other things. I was really inspired by that idea.”

Dr. Wood’s talk can be seen on <www.westministerforum.org/forum>.

(This story originally appeared in the Minnesota Spokesman-Recorder.)

‘Cancer: My journey in time’
When I’m better