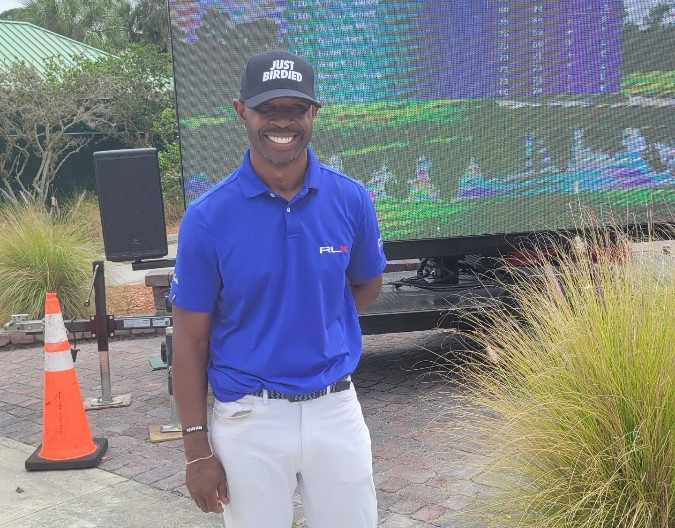 Tim O’Neal, the 49 year-old from Savannah, Georgia, triumphed at the APGA Tour’s regular-season opener at TPC Harding Park in February and lost in a playoff at the APGA Tour Farmers Insurance Invitational in January.

PORT ST. LUCIE, Fla. – Veteran pro golfer Tim O’Neal calmly dropped a 15-foot birdie putt on the 18th hole to capture the APGA Tour at PGA Golf Club title by a single stroke Sunday, chalking up his second win of the season and taking over the top spot in the Lexus Cup Point Standings.

O’Neal, the 49-year-old from Savannah, Georgia, triumphed at the APGA Tour’s regular-season opener at TPC Harding Park in February and lost in a playoff at the APGA Tour Farmers Insurance Invitational in January.

In addition to APGA Tour competition and U.S. Open qualifying, O’Neal will play as a sponsor exemption in the Korn Ferry Tour’s Simmons Bank Open May 5-8 in Tennessee.

He will turn 50 years old on August 3 and is hoping to be invited as a sponsor exemption to play on the PGA TOUR Champions circuit before the end of the year.

“With the putt on 18 today, I thought that the odds would be in my favor because I was missing putts throughout the day,” said O’Neal, who played in the first-ever APGA Tour event back in 2010.

“I shot a clean 66 yesterday, but it was bumpy today. So I’m not where I want to be yet, but things are trending in the right direction. Just trying to get better every day.”

After an opening-round 66, O’Neal was tied for the lead with Seth Arthur of Metropolis, Illinois heading into Sunday’s final round.

He posted a one-under front nine with four birdies but couldn’t pull away because of a double-bogey 5 on the sixth hole.

He registered a birdie on 10 and then seven consecutive pars until the winning putt on 18.

Bradham was in contention throughout with a first-day 69 followed by a 67 to take the lead in the clubhouse at eight-under 136.

His eagle on the par-five, 514-yard fifth hole was the highlight of the front nine and he posted consecutive birdies on 14 and 15.

A bogey on 17 opened the door for O’Neal’s winning stroke on the final hole. In third place was Marcus Byrd of Knoxville, Tennessee, with a 67-70-137.

Byrd was coming off his first PGA Tour start as an exemption at last week’s Corales Puntacana Championship in the Dominican Republic.

Hall and Byrd both scored eagles on the 17th hole Saturday and Johnson eagled the seventh hole on Sunday. With his second regular-season victory, O’Neal increased his lead in the Lexus Cup Point Standings, which he won in 2020 as the APGA Tour Player of the Year.

The APGA Tour is back in action on April 11-12 with APGA Tour at TPC Las Vegas in Nevada.

The APGA Tour was established in 2010 with the mission to bring greater diversity to the game of golf by hosting and operating professional golf tournaments, player development programs, mentoring programs, and introducing the game to inner-city young people.