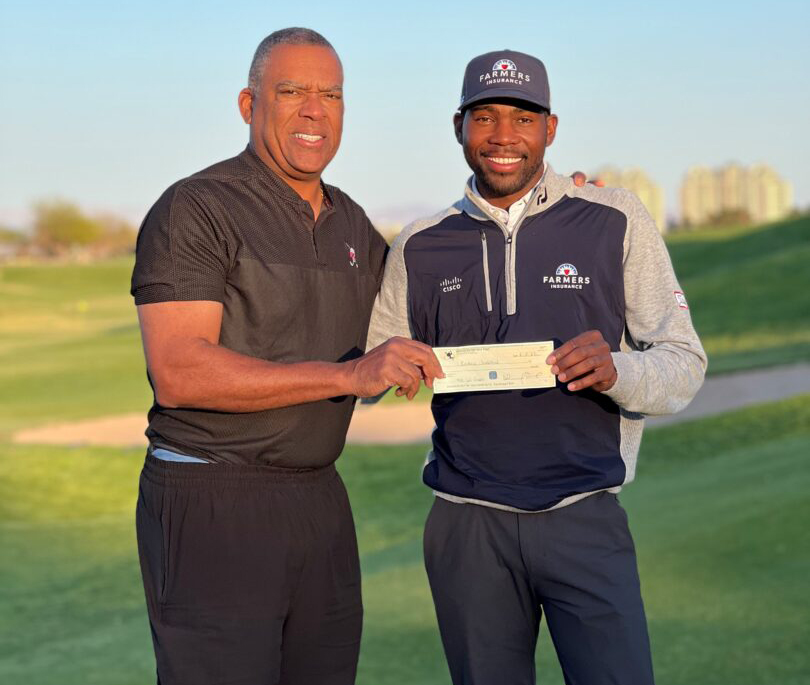 The victory, his third career win on the APGA Tour, came in a single-day competition after Monday’s first-round was called off as winds gusting to 70 MPH made competition unsustainable.

One of the APGA Tour’s most recognizable players, Johnson became a prominent story in 2021 when his PGA TOUR debut at the Farmers Insurance Open was scuttled by a positive COVID-19 test.

The golf world rallied in support of Johnson and the APGA Tour and he was invited to three PGA TOUR events in the ensuing months, fulfilling his dream of competing at the highest level.

“It was quite a journey last year, for sure,” said Johnson, the Tallahassee native now residing in Orlando.

“Then my daughter was born in October and that was amazing. Now, I’m more relaxed, patient. I know she’s going to love me whether I shoot 82 or 62.”

Last year, Johnson fired a final-round 70 to win at TPC Las Vegas by a single stroke. This year, he was two strokes better than Aaron Beverly of Fairfield, California, Joseph Hooks of Farmington Hills, Michigan, and Willie Mack III of Grand Blanc, Michigan, who tied for second with 2-over-par 73s.

Johnson won the tournament on the 591-yard par-5 15th hole. He drove into the rough, punched out up the fairway, and then holed out for eagle from 133 yards with a gap wedge. “It bounced a couple of times and then rolled in,” Johnson added.

His winning 71 was even par on the 6,699-yard layout with two birdies and two bogeys on the front nine. On the back, he carded the eagle plus two bogeys, good enough as the rest of the field battled the windy conditions.

Johnson’s other credentials include winning the APGA Tour season-end championship in 2020 plus one start on the Korn Ferry Tour in 2021 and a start this past January at the Farmers Insurance Open. Johnson won $7,500 from the $25,000 purse.

The APGA Tour is back in action on April 18-19 with APGA Tour at TPC Scottsdale in Scottsdale, Arizona.

The APGA Tour was established in 2010 with the mission to bring greater diversity to the game of golf by hosting and operating professional golf tournaments, player development programs, mentoring programs, and introducing the game to inner-city young people.