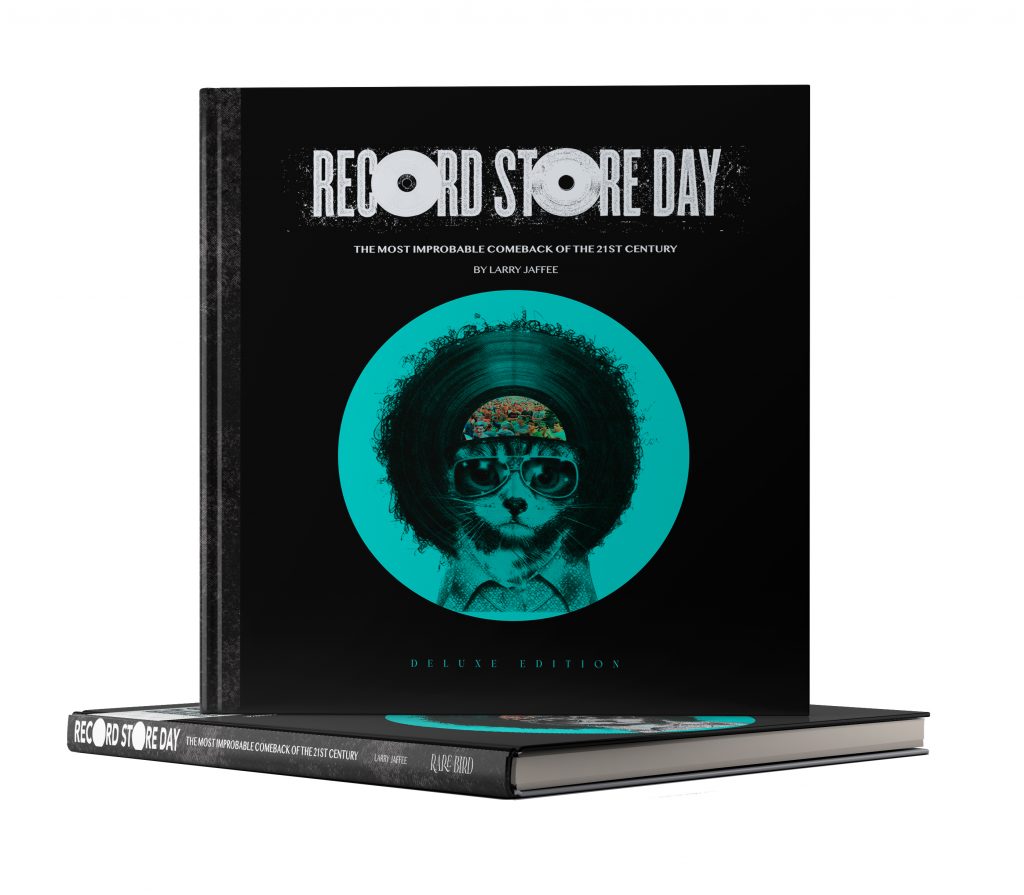 The Most Improbable Comeback of the 21st Century by Larry Jaffee marks the 15th celebration of RSD.

Record Store Day was conceived in 2007 at a gathering of independent record store owners and employees as a way to celebrate and spread the word about the unique culture surrounding nearly 1400 independently owned record stores in the US and thousands of similar stores internationally. They got the idea from the emerging Free Comic Book Day, which celebrates Comic Book Stores on the first Saturday each May. The first Record Store Day took place on April 19, 2008, and today there are thousands of Record Store Day stores participating, on every continent except Antarctica.

This is a day for the people who make up the world of the record store—the staff, the customers, and the artists—to come together and celebrate the unique culture of a record store and the special role these independently owned stores play in their communities. Special vinyl and CD releases and various promotional products are made exclusively for the day. Festivities include performances, cook-outs, body painting, meet & greets with artists, parades, DJs spinning records, and on and on.

In 2008 a small list of titles was released on Record Store Day and that list has grown to include artists and labels both large and small, in every genre and price point. For several years, 60% or more of the Record Store Day Official Release List came from independent labels and distributors. The list continues to include a wide range of artists, covering the diverse taste of record stores and their customers. A Record Store Day participating store is defined as a brick-and-mortar retailer whose main primary business focuses on full-time, stand-alone physical store locations, with a major commitment to music retail, and whose company is independently owned, and not publicly traded. (In other words, real, live, physical, indie record stores—not online retailers or corporate behemoths). There are a lot of stores that participate in Record Store Day and are all INDEPENDENT, which means they have complete control over their stock, store policies, and which promotions they participate in.

The titles on the RSD 2022 Official List will be released at participating record stores on Record Store Day, April 23, and some on RSD Drop date June 18. There is one List, with titles broken out for each date. You can choose to view the List, with added detail and artwork, or you can print out a PDF that can be used as a wish list or shopping guide, on their website: recordstoreday.com

There are three categories on the List: EXCLUSIVES: These titles are physically released only at indie record stores. RSD FIRST: These titles are found first at indie record stores but may be released to other retailers or webstores at some point in the future. SMALL RUN/REGIONAL TITLES: These titles are either regionally based and sold at specific stores, or are press runs under one thousand, which means they may be harder to find at record stores around the country. The majority of the titles on this section of the List are Small Run titles; any title that’s regionally based and most likely to be found at specific stores will have that called out in the description, which can be found on the web-based version of the List.

There are a lot of independent stores that participate in Record Store Day. Not all of them will choose to participate in all promotions, or carry all releases. Just because a store is listed here does NOT mean it will have the goodie or record you’re looking for. That said, find a store near you and check with them directly. It’s always a good idea to be BFFs with your neighborhood record store.

Record Store Day 2022 marks the 15th celebration of the culture of the indie record store, and to mark the occasion, Rare Bird Publishing is releasing a book written by Larry Jaffee. RECORD STORE DAY: The Most Improbable Comeback of the 21st Century, which goes back to the beginning, with the remembrances and voices of the organizers, record store community, musicians and more is coming in April in three editions: Paperback, Deluxe Hardbound, and LP — A Think Indie x RSD + Vinyl edition, limited to 1100 copies; this special edition includes a compilation LP of in-store performances at record stores across the US, featuring Paul McCartney, Metallica, Pearl Jam, Billie Eilish, Brandi Carlile, Imagine Dragons, Jason Isbell + the 400 Unit, Justin Townes Earle, Regina Spektor, Frightened Rabbit, Mudhoney, and Jose Gonzalez.