FDA: Smoking while Black and Brown in America 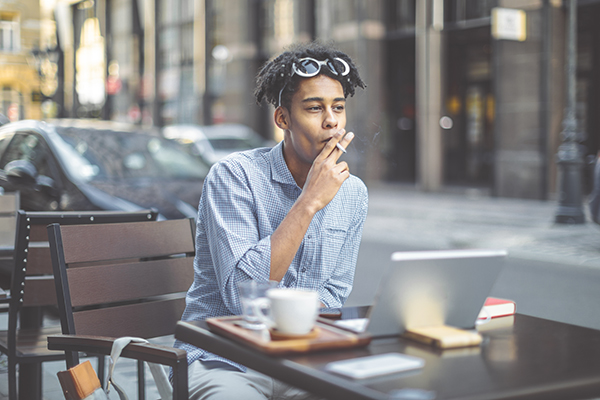 According to the Centers for Disease Control, over 85% of Black and Brown smokers prefer menthol cigarettes. (photo courtesy of <iStockphoto/NNPA>)

Whenever the history of racial discrimination in the United States appears to repeat itself, it produces predictable rhymes and sometimes tragic social consequences. Mark Twain, Ida B. Wells, James Baldwin, and Toni Morrison all had one thing in common as visionary authors. They used their pens to offer literary critiques about America’s historical inflection points concerning racism and systemic inequalities.

The federal government’s recent announcement that it is close to proscribing a ban on menthol cigarettes is another public policy gone astray that will produce unintended racial-discriminatory consequences. As a result of a decades-long marketing campaign aimed at African Americans, nearly 85% of all non-Hispanic Black smokers choose menthol cigarettes, the highest percentage of menthol cigarette use compared to other racial and ethnic groups. The Federal Food and Drug Administration (FDA) should be questioned about their disparate targeting of African American and Latino-American smokers who disproportionately prefer to smoke menthol cigarettes. This is an urgent matter now that the FDA has just asked the government’s Office of Management and Budget (OMB) to review the proposed discriminatory ban.

For the record, I do not smoke tobacco or marijuana. I am raising questions, however, to the FDA and to the U.S. Congress because I care passionately about protecting the civil rights and cultural rights of communities of color. We should learn from the past about how to avoid racial injustice rather than to entertain the repetition of pseudo-justifications of wrongdoing and counterproductive public policies that disparage communities of color.

Recalling back in the 1980s and 1990s there was the prevalence of the availability and use of crack cocaine that swept severe drug-related suffering in urban areas across the nation. Because of decades of White flight and self-segregation, those same inner-city areas were disproportionately populated by Black and Brown families. The result was another regrettable chapter in American history when crack cocaine ravaged our communities.

The subsequent response from the federal government was neither compassion nor empathy. Rather, the U.S. Congress passed the now-infamous 1994 Crime Bill, which treated the possession of crack cocaine disproportionately harsher in the criminal justice system than powder cocaine, which was more expensive and more commonly used by White drug users. Too many communities of color were once again devastated by the unjust massive long-term imprisonment of crack cocaine users for decades that literally destroyed families and left hundreds of thousands of children without parents while escalating mass incarceration of Black and Brown people to an unprecedented national level.

It is, therefore, against this historical backdrop that we find anew the recent contradictory announcement by the Biden Administration’s FDA. According to the Centers for Disease Control, over 85% of Black and Brown smokers prefer menthol cigarettes. While there may be compelling public health concerns that can be cited to support proposing a ban on smoking cigarettes, the question arises why the FDA only wants to target and ban ‘menthol’ cigarettes that are disproportionately used and preferred by Black and Brown smokers. Law enforcement agencies, similar to what happened by law enforcement in response to the crack cocaine epidemic, will ultimately have to enforce the proposed ban on the sale of menthol cigarettes.

In addition, serious concerns today abound among national and local law enforcement leaders that a prohibition of these particular tobacco products will only end up dramatically increasing an illicit, underground market for these menthol products. I am certain that the U.S. Department of Homeland Security will rightly oppose any public policy by the FDA that will lead to further substantial border insecurity from the future billion-dollar illicit smuggling of proposed menthol-banned tobacco products into the United States. Another serious unintended consequence will be the illegal trafficking of FDA-banned cigarettes by international terrorists who will profit millions of dollars from that illicit trade.

I write, therefore, on behalf of the National Newspaper Publishers Association (NNPA) and the Black Press of America that have been “pleading our own cause” since March 16, 1827 with the first publication of Freedom’s Journal 195 years ago. Our concerns are not hypothetical and do not exist in a vacuum.

Our experiences inform us that the implementation of a menthol ban will inevitably and undoubtedly create an increased number of stops, frisks, and interactions between law enforcement and members from Black and Brown communities. According to the Prison Policy Initiative, Black and Brown residents in the U.S. continue to have a long and troubled legacy of disproportionately larger numbers of police stops and interactions with the police. The proposed menthol ban will do nothing to quell this troubling reality.

Moreover, there is data to suggest that a prohibition on the sale of menthol cigarettes would not meet the proposed ban’s intended goal. According to a report by the United States Surgeon General, published in 2020: “The evidence is suggestive but not sufficient to infer that restricting the sale of certain types of tobacco products, such as menthol or other flavored products, increases smoking cessation, especially among certain populations.” Indeed, a report by the National Bureau of Economic Research echoes this concern and suggests that a prohibition on menthol cigarettes is “unlikely to be a panacea,” because while the product may be prohibited in Canada, it is available on Native Canadian reserves, and still available for purchase throughout Mexico.

On his first day in The White House, President Biden signed the Executive Order (13985) on Advancing Racial Equity and Support for Underserved Communities Through the Federal Government.    That was a much-needed federal corrective action taken by President Biden. Notwithstanding those facts, it has become a noticeable contradiction for the FDA to now embark on a Notice of Proposed Rule Making (NPRM) with respect to a menthol ban tentatively scheduled for April 2022.

What are some of the possible alternative options for the FDA and for the U.S. Congress with respect to menthol cigarettes? One option is for the Secretary of Health and Human Services, acting through the Commissioner of the FDA to enter into an agreement with the National Academies of Sciences, Engineering and Medicine, and additional relevant entities (including representatives of community organizations that have been historically underrepresented in the federal government and underserved by, subject to discrimination in, federal policies and programs) to conduct a national study on the impact of a menthol ban would have on:

There are other options in addition to the stated above proposal that I am confident can and should be explored by both the U.S. Congress and the FDA. What should be prohibited at this point should be all forms of racial profiling and targeting. Smoking while Black and Brown should not be the predicate for more negative disastrous interactions between law enforcement and our communities who have already suffered too much. I recently had the honor to attend a national meeting of the National Organization of Black Law Enforcement Executives (NOBLE) in Baton Rouge, Louisiana. Black police chiefs and other Black law enforcement executives from across the nation voiced their concerns about the negative, disparate and dangerous unintended consequences of the proposed FDA ban on menthol cigarettes.

(Dr. Benjamin F. Chavis, Jr. is currently the president./CEO of the National Newspaper Publishers Association (NNPA) and executive producer/host of The Chavis Chronicles television show that is broadcast weekly on PBS TV stations throughout the United States.)

Black no more
Conversations with Miles