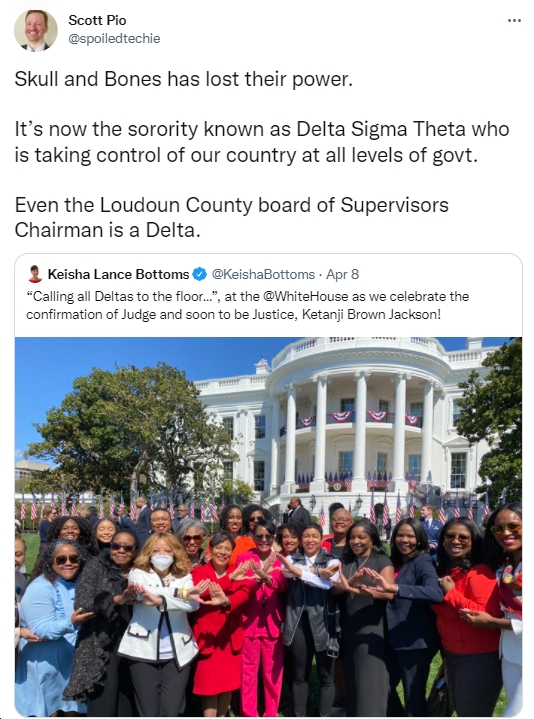 (TriceEdneyWire.com) — While hundreds were celebrating the recent confirmation of Judge Ketanji Brown Jackson at the White House as the nation’s first Black woman on the Supreme Court in its 232-year history, an angry resentful backlash was brewing, suggesting that Black women are achieving too much power.

The venomous pushback was aimed at Delta Sigma Theta Sorority, Inc., one of the nation’s largest predominately Black sororities, who gathered to take a group picture on the White House lawn, as did so many others to record the event.

But seeing so many Black women together at the People’s House doing a photo op infuriated Scott Pio, Loudon County, Va., GOP chair, who tweeted: “So the Skull and Bones has lost their power. So, now Delta Sigma Theta Sorority is taking control of our country at all levels of government. Even the Loudon County Board of Supervisors Chairman [Phyllis Randall] is a Delta.) So now Deltas are in control of multiple levels of government. I wonder if they are the organization at the center of the push for equity and CRT [critical race theory] in our classrooms.”

Roland Martin, the hard-hitting journalist, interviewed Pio, a White Republican on his YouTube show excoriating him for his ignorance and unsettling insinuations that the Deltas are a surreptitious, un-American secret society.

Pio was ignorant of the Delta’s 109-year history and dedication to “academic excellence and providing assistance to those in need,” according to their website. President Biden and Press Secretary Jen Psaki wished Delta Sigma Theta a Happy Founders Day at a press briefing on January 13, 2020, a day which celebrates its activism and public service which includes providing millions of dollars in scholarships to struggling students.

Pio reflects the arrogance of White power and privilege that all sectors of influence belong exclusively to them. All other competitive groups are outsiders and are un-American. Yet nothing is more secretive and self-serving than the Skull and Bones society Pio referenced as worthy of leadership. This group founded in 1832 at Yale University has the stated mission to advance themselves to prominence in business and government. This ‘old boy’ network works for them. At least three former presidents (William Howard Taft, George H.W. Bush, and his son George) have been members, as well as Supreme Court Justice Potter Stewart.

Pio also reflects the fear and even loathing that some factions of White power have for intelligent, educated Black women who are not content to taking a backseat to White male claims of perceived superiority. Political leaders, such as Shirley Chisholm, the first Black woman elected to the House of Representatives and to run for president; Marcia Fudge, head of the U.S. Department of Housing and Urban Development; Keisha Lance Bottoms, former mayor of Atlanta; entertainment icons, such as Cicely Tyson and Angela Bassett, are Deltas as well as thousands of others in 900 chapters around the world.

Deltas across the country are challenging Pio’s assertions which are no doubt bubbling up throughout the ranks of the GOP.

Dr. E. Faye Williams, president of the National Congress of Black Women, author of Wake up and Stay Woke, and a Delta said: “I know a lot about Delta Sigma Theta to be fair-minded, hardworking, brilliant women. They are just the kinds of women a non-racist White guy and community would love to have working in their communities. His big problem is having Deltas around him who work hard every day to perfect our union, while people like him, especially those in his political party do things every day to destroy the promise of our union.”

My larger concern—I am also a Delta—is how Pio condemned the Deltas for daring to be committed to ‘equity,’ which means treating all races and creeds as worthy of respect and equal treatment. Even worse, his linking the Deltas to critical race theory are fighting words, a code the GOP uses to rewrite history and textbooks to foster the Big Lie that slavery and other social evils were beneficial to the advancement of America. Those who speak against this fallacy are labeled socialists are un-American and could face punitive consequences.

Trump is the guardian of the GOP’s anti-Black dogma where only three Republican U.S. Senators voted for the nomination of Judge Jackson for the Supreme Court, despite her sterling qualities. Thus, I wonder how far will this mislabeling of Black female leaders go. Is this the first round of an attempt to blackball or penalize Deltas and other Greek organizations? The Deltas are just one out of nine Black sororities and fraternities called the Divine Nine, all of whom work for equal and human rights.

These Black fraternities and sororities, however, are not new to political suppression. The Delta’s first public act was in March 1913, when founding members marched with suffragettes to protest for women’s rights. Dr. Martin Luther King, Jr. was a member of Alpha Phi Alpha fraternity, of which the legendary Roland Martin is also a member.

Another co-founder of a Black woman’s organization who is also a Delta, sees Black women as insightful, compassionate leaders who can help lead America out of the violent confrontation our nation is in. She gave a quote only under conditions of anonymity because of today’s vengeful political schemes. “We will prevail. The goal of a peaceful, loving productive country,” she said.

Girls groomed to be ladies

State continues attack on TSU by denying them...

Time is now for increasing diversity in American...

Nancy Pelosi is most successful, effective Speaker of...