In the summer of 2020, a peaceful protest in response to the death of George Floyd turned violent in downtown Nashville. One casualty of the violence was the permanent Civil Rights plaque near the downtown courthouse. It was broken, and protestors then used the pieces to break the courthouse windows. 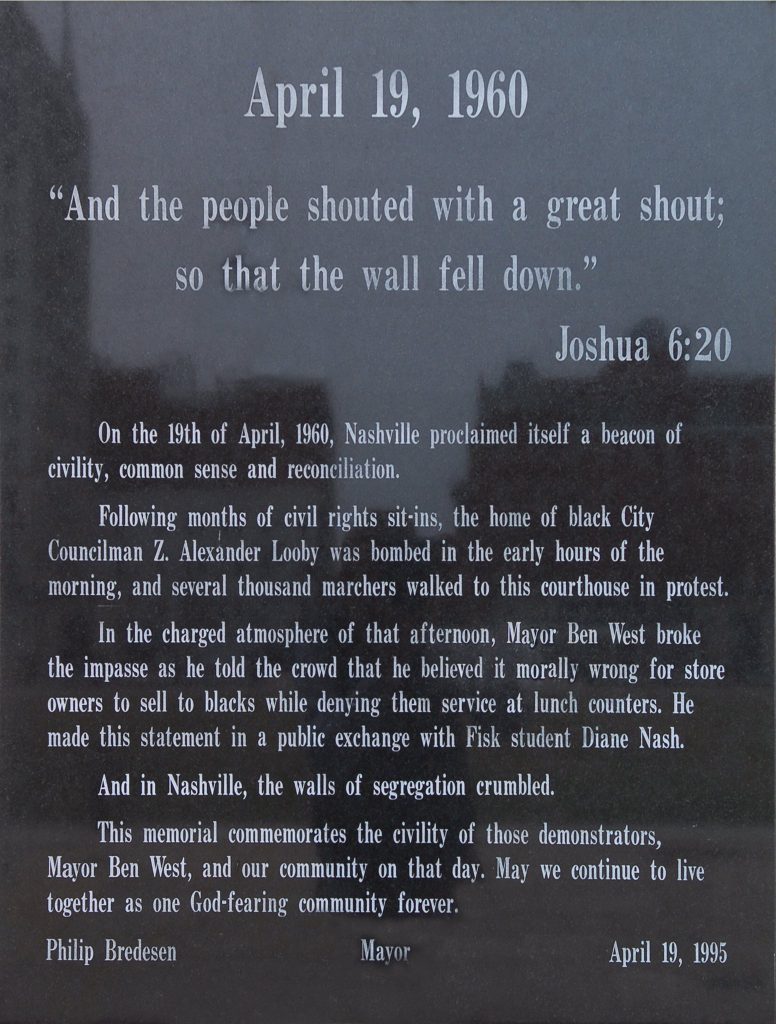 “In the summer of 2020, a peaceful protest that was in response to the murder of George Floyd turned violent in downtown Nashville,” said Mayor John Cooper. “The plaque, which was mounted on a wall of city hall, was broken, and some of its pieces were used to break the courthouse windows.

“Today, I am joined by Fisk, the Nashville Bar, and more to unveil a permanent exhibit for the pieces of the plaque. Thanks to our hosts for honoring our city’s past. I look toward the future where Nashville can be a thriving and equitable city that works for everyone.”

The Civil Rights Plaque, originally dedicated on April 19, 1995, commemorated the 1960 desegregation of Nashville. On the morning of April 19, 1960, the home of Black Councilman Z. Alexander Looby was bombed. Several thousand marchers walked to the Metro Courthouse in protest, where Mayor Ben West met them and told the crowd, in a public exchange with Fisk University student Diane Nash, that shop owners were wrong to sell to Black residents while denying them service at lunch counters.

The pieces of the plaque are part of a new, permanent exhibit in the Special Collections and Archives area which includes a digital display with a documentary about the desegregation of Nashville and the historical significance of the plaque. This project is the first of two these organizations have undertaken to provide an accurate portrayal of the history of civil rights in Nashville.

Karine Jean-Pierre, whose long career in Democratic communications led her to the podium last year as the second Black woman to hold a White House daily briefing, will regularly host

At the onset of the pandemic, there wasn’t a single state, region, or county in America where a full-time worker earning the minimum wage could afford a two-bedroom rental home,

(TriceEdneyWire.com) – Grand Rapids Police Chief Eric Winstrom finally identified Police Officer Christopher Schurr as the cop who shot Patrick Lyoya in the back of the head, killing him instantly

A federal judge in Minneapolis accepted a plea deal on May 4, in the case of Derek Chauvin, the former officer convicted of killing George Floyd. U.S. District Judge Paul

After 25 years working as a White House correspondent, April Ryan has seen it all. Before he became president, Barack Obama invited Ryan as a guest of his for a

Speaking at a morning breakfast in Washington, D.C. on April 29, Democratic National Committee Chair Jamie Harrison addresses the goals of the party moving forward into the midterms. Harrison, 46,