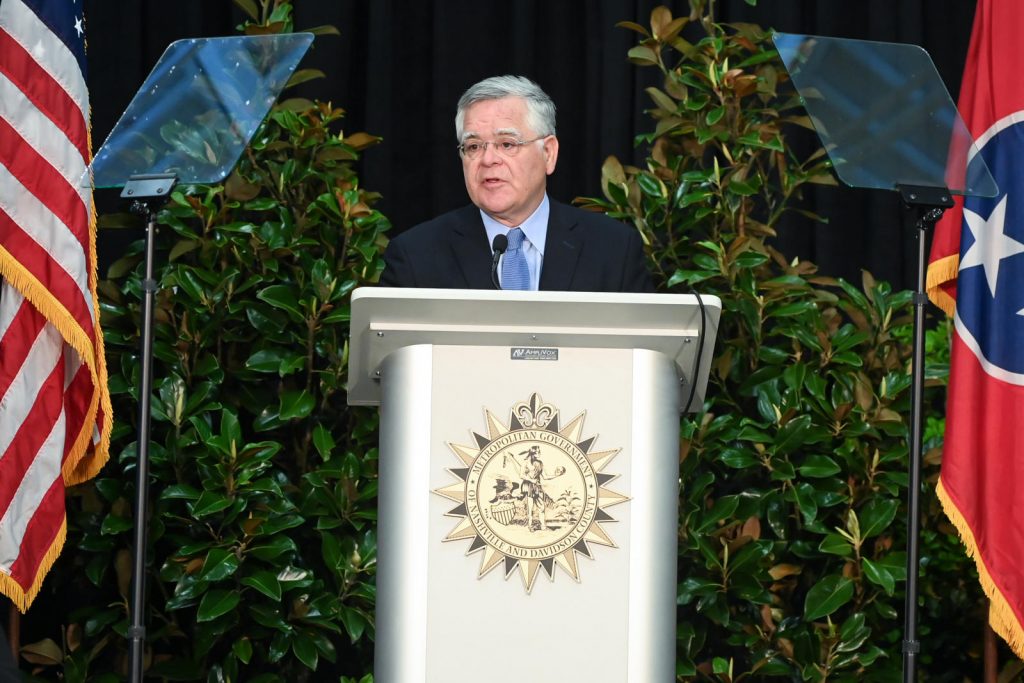 Mayor John Cooper is shown here giving his State of Metro address. Studies show that though most Nashvillians believe the city is headed in the wrong direction, support for the mayor is only down one percent. (photo courtesy of the Mayor’s Office)

For the first time since the ‘Vanderbilt Poll–Nashville’ was established in 2015, more than half of respondents say they believe the city is headed in the wrong direction.

Fifty-three percent of those who took the survey, which gauges people’s perception of their local government, said that Nashville is off track—a significant swing from last year, when 59% of residents polled said they believed the city was “generally headed in the right direction.”

“People are no longer as rosy about Nashville’s future as they once were,” said Josh Clinton, Abby and Jon Winkelried Chair and professor of political science, and co-director of the Vanderbilt Poll.   “That’s a shift—that people think the city is going in the wrong direction.”

The latest results paint a picture of a pandemic-weary community that likely is disenchanted with several aspects of everyday life, including inflation, skyrocketing housing prices and the Russian invasion of Ukraine. Such stressors can influence people’s view in general, particularly when it comes to quality of life issues, Clinton said.

However, many respondents have given local leaders, such as Mayor John Cooper, high approval ratings.

“They still are broadly approving of elected officials who are running the city, suggesting that some of the malaise is probably just general effects that are kind of beyond the control of people in Nashville itself,” Clinton said.

Cooper’s approval rating in the latest poll came in at 56%, down only one percentage point from last year. He has the approval of 67% of Democrats, 56% of independents, and 40% of Republicans.

These declines square with the shift in ‘right track versus wrong track’ numbers for Nashville overall, but the 2022 approval ratings are still strong. Indeed, the city’s firefighters enjoyed nearly unanimous approval ratings (95%) in the Nashville Fire Department’s first appearance on the annual poll of registered Davidson County voters.

Polarization is widespread in American politics today and traditionally shows up along the party lines that divide Democrats and Republicans. But this year’s Vanderbilt Poll results suggest that income may be a big factor driving wedges between residents of Nashville.

Also, more than 30% of residents making more than $100,000 a year rated the city’s economy as ‘very good,’ compared to only about 10% of Nashvillians overall.

“We are starting to see potential polarization based on income,” said John Geer, co-director of the Vanderbilt Poll, Ginny and Conner Searcy Dean of the College of Arts and Science, and professor of political science.

“Former President Donald Trump tapped into the anger, especially among rural and less well-off people, because they did not feel the government was being responsive to them. And that’s manifested itself in lots of party polarization. But the realities are that at the core of it, we’ve suffered serious income polarization in this country for the last 30 years, or perhaps even longer. And we’re beginning to see the consequences of that here in Nashville.”

Other issues highlighted include:

COVID-19: The poll showed that most people are moving on from focusing on COVID-19 as a major concern. Fifty-four percent of those surveyed said they’d already contracted COVID-19 or have lived with someone who tested positive for the coronavirus.

Major League Baseball: A plurality of respondents supported bringing an MLB team to Nashville, but more than a quarter of those polled were unsure of the merits of doing so. This is a conversation still in its early stages, Geer said.