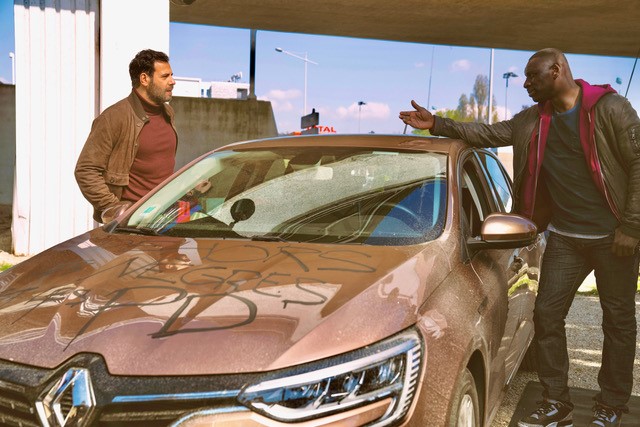 Laurent Lafitte and Omar Sy in The Takedown.

Biracial buddy cop movies (e.g., Beverly Hills Cop, Lethal Weapon) aren’t a new phenomenon and could use a refresh. The genre gets a needed update with this French ebony/ivory crime story that’s novel due to its unusual antagonists. Right-wing, anti-immigrant zealots.

In this year’s French presidential election, the incumbent leader, Emmanuel Macron, a moderate, beat his far-right and very xenophobic challenger Marine Le Pen. Clearly, racism and the fear of foreigners weren’t winning divisive issues for her. Those social ills are also used as political tools in the U.S. But here, even the most daring filmmakers haven’t produced a crime/action/comedy that tackled the subject of ultranationalism. Not sure what’s in the Perrier they’re drinking over there but, screenwriter Stephane Kazandjian and director Louis Leterrier (Netflix’s Lupin series and the film Transporter) have either lost their minds or are extremely perceptive and progressive. Talk among yourselves.

Chief Ousmane Diakité (Omar Sy, Lupin and Intouchables) and Captain François Monge (Laurent Lafitte, Elle) have worked together on other police investigations. Their relationship is strained at best. Ousmane, an African immigrant, and single dad worked himself up the ranks, succeeded in the French Gendarmerie, and now heads the Criminal Division. He’s so well respected and such a trophy that his commanders corral him into a publicity campaign to attract other people of color. François, conversely, failed a police exam three times, is the son of rich parents and he still mooches off mom and dad. His sex escapades have included his own therapist and he’s so metrosexual his socks, handkerchiefs, and underwear probably match. Additionally, Ousmane and François once dated the same woman, which makes them even more estranged.

A murder investigation leads the two out of the city into the French Alps where White racist bigots want to take their country back from the people who don’t look like them. Sound familiar? The detectives are assisted by a younger officer named Alice (Izia Higelin, Samba). The three follow a trail of clues, including a severed torso, and ultimately try to thwart other crimes against non-nationals.

The screenplay couldn’t be more topical. In fact, if Netflix streamed this French film before the country’s recent elections, it didn’t do Le Pen any favors. Especially since one of the film’s most eccentric antagonists resembles her elder self—aged but with the same snarl.

Clearly, audiences will root for the good guys because solid scripts make that happen. But their enthusiasm will be boosted by Sy’s friendly and disarming demeanor. When he smiles audiences smile with him. He’s as charming as Lafitte is suitably off-putting, self-absorbed, urbane and prissy. They’re an entertaining odd couple with a comic bromance that grows on you increasingly as they encounter danger. Their race-based conversations are often witty, funny, and relevant. Personal digs can be very pointed. The clever language, jovial banter, and sensitive talk are a credit to Kazandjian’s edgy script or to the writer who translated the French dialogue into American slang.

Credit Leterrier for making what could have been a decent but unmemorable action film (e.g., 355 or Hitman’s Wife’s Bodyguard) noteworthy. Sometimes when Ousmane and Alice mull over crime details, instead of a generic flashback, the footage depicts reenacted scenes on screen in front of the two leads. These visions could have been distractions, instead, they’re fascinating. His direction also enhances Sy and Lafitte’s chemistry, making them even more appealing, annoying, combative, and amicable.

Sight gags (cops squeezing through a tight doorway), physical humor (the morgue scene is hysterical), and adrenalin-pumping foot and car chases are all lively. Scenes with Lafitte bedding whoever he can, are amusing in a knockoff James Bond way. Sequences with all the colorful faces that have changed old France into multicultural France capture a burgeoning reality. There’s just enough here to hold viewers’ attention whether they’re in it for the excitement, laughs, or social-consciousness raising.

The Takedown is a follow-up to another Sy/Lafitte cop film, On the Other Side of the Tracks.

So, don’t be surprised if this sequel spawns another chapter with the same team of Kazandjian, Leterrier, Sy, and Lafitte. Ebony and ivory live together in ‘im’perfect harmony.