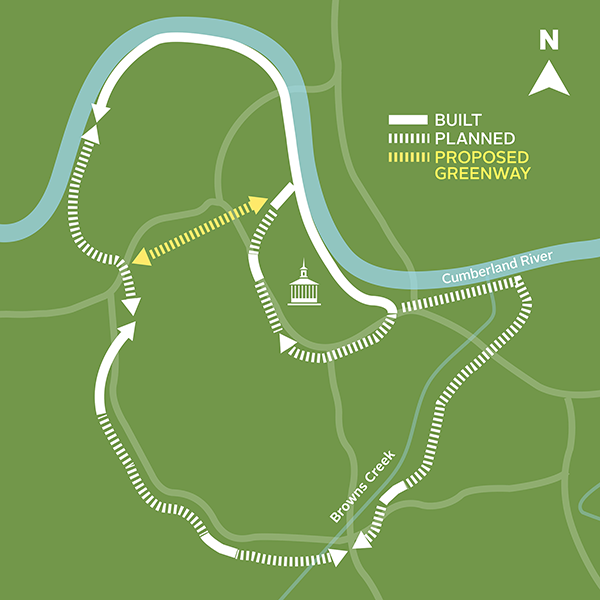 Community members are invited to provide feedback on a Rail-with-Greenway, a linear park with a paved greenway trail for pedestrians and bicyclists, in the North Nashville area. The proposed greenway would tie into the existing 440 Greenway near Centennial Park, follow along an existing rail line owned by Cheatham County Rail Authority (CCRA), and extend to Frankie Pierce Park and the Nashville Farmers Market. Other possible connections to be made include Kossie Gardner, Sr.; Watkins and William Edmondson Parks; and Fisk University.

Greenways are linear parks with paved trails that connect neighborhoods while giving users a place for exercise and an opportunity to enjoy the outdoors. They are often located along natural areas like streams and rivers or along railroad and utility corridors. These linear parks provide green space for conservation, recreation, and alternative off-street transportation while also providing wildlife habitats.

Metro Parks Director Monique Horton Odom said: “We know that parks and greenways are essential to the health and well-being of our communities. This project could be a valuable asset to North Nashville. It would add four miles of a paved pathway that would connect neighborhoods, landmarks, and universities to the overall greenway system of nearly 100 miles.”

Dr. James E.K. Hildreth, president/CEO, of Meharry Medical College, said: “The simple activity of walking has important health benefits from losing weight to improving your mood because it increases blood flow and blood circulation to the brain and body. Having safe and convenient places to walk in our city is key and this greenway would help connect residents to parks including Centennial, Watkins, and Frankie Pierce Park.”

The public’s input is welcome at community meetings on Thursday, June 9, from 6-8 pm and Saturday, June 11, from 10 am until 1 pm in the Community Room of Family & Children’s Service, 2400 Clifton Avenue. Snacks will be provided at both meetings. Additionally, an online survey will be launched for residents unable to attend in person.

Council Member Brandon Taylor, (District 21) said: “The proposed greenway has the potential to open connectivity throughout the North Nashville community for all neighbors. With the use of signage and design features, the greenway corridor provides opportunities to tell the history and stories of North Nashville. This greenway could create a place to enjoy nature while bringing together family, neighbors, and friends.” The proposed route is partly in District 21 and then crosses District 19.

More information can be found on the Metro Parks project website: <www.nashville.gov/departments/parks/greenways-and-open-space/charlotte-rail-greenway>.