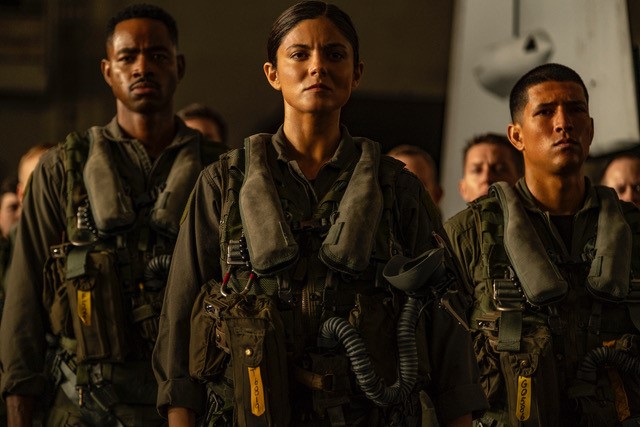 The cast of Top Gun Maverick.

Not sure what they paid Tom Cruise for making this Top Gun sequel. But whatever it was, it’s not enough. He carries this behemoth action/drama on his shoulders and well deserves a big payday.

Back in 1986, cadets at a U.S. Navy elite fighter pilot school were rivals competing for respect. One upstart stood out: Pete ‘Maverick’ Mitchell (Cruise). He was an aviator who charted his own path. Thirty-six years later that top dog is an old dog. An aging test pilot whose career didn’t lead to fancy titles like admiral. Instead, he’s still in the cockpit pushing new, high-tech aircraft to the max: Mach 6, 7, 8, 9…

Pete gets assigned the life-threatening task of thwarting a potential disaster in a foreign land. His job? Fly low altitude to a seemingly inaccessible target, hit a bullseye with just one bomb and escape a phalanx of anti-artillery weapons. Now the former student becomes a leader assembling a crew of new Naval pilots on a mission that faces impossible odds: “Someone is not coming back from this!”

Does the three-decade-old Top Gun premise still have legs? Can an older movie star appeal to younger audiences—the filmgoers who push movies to billion-dollar box office success? You can bet the TG:M team thought that through. They cast young multi-ethnic men and women. Actress Jennifer Connelly appears as Pete’s love interest, which should attract an older crowd. Then there’s Cruise’s own fan base. Prospects are high.

The thoughtful screenplay (Ehren Kruger, Eric Warren Singer, Christopher McQuarrie) gives the characters their own lanes. The writers’ one big sin is introducing the cadets in a bar scene that goes on way too long. Yes, it pulls several storylines together and distinguishes the characters, but it also gives viewers too much to contemplate, initially. When the bar patrons break into song, their warbling becomes an inauthentic moment. More like a beer commercial than a movie.

Rivalries, history, jealousy, comradery and ambition drive them all to either accomplish goals or stymie others’ efforts. Rear Admiral Chester ‘Hammer’ Cain (Harris) to Maverick: “The future is coming. And you are not in it!” There are enemies, road blockers and haters, but the real villain could be failure and death. That cloud hangs over their heads as they fly into hostile territory, which is curiously never named. None of Hollywood’s standard ‘boogeyman’ countries are pinpointed—not Russia, Iran or Afghanistan. 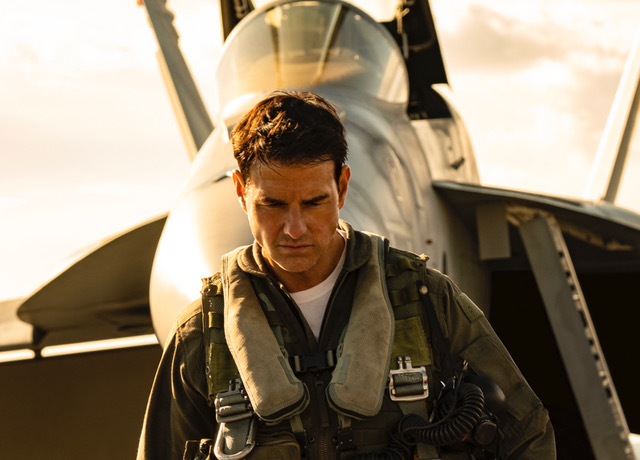 Fortunately, director Joseph Kosinski’s (TRON: Legacy) style is not as bombastic as that of a Michael Bay (Ambulance, Pearl Harbor). There aren’t a zillion distracting images per minute. Under his smart guidance, the edits are quick, judicious and rhythmic (editor Eddie Hamilton, Mission: Impossible—Fallout) for two hours, 11 minutes. All the visuals glisten, are well composed, perfectly lit and many are bigger than life due to cinematographer Claudio Miranda’s (Life of Pi) penchant for closeups.

Sometimes there are moments when Cruise and Connelly are holding each other by a car or sunset that look too superficial. These transgressions are counterbalanced by spectacular aerial displays. Fighter jets flying perilously on their backs. Then straight up, straight down or hugging the ground. Supposedly, most of these tense plane shots happened in flight, with the cast strapped into their seats delivering their lines. True or not true, watching these harrowing acrobatics will push audiences back into their seats. Like they’re withstanding G-force themselves. The movie tells you how it will feel: “Like an elephant is sitting on your chest.”

At age 59, Cruise still looks fit—and at some angles, he could pass for 35. His command of the lens, screen and audience is undeniable. Yes, he’s more mature than the young Maverick was back in 1986, but aging has suited his persona well. Cruise also dials up his acting chops in emotional scenes with Teller, who plays the son of a former wingman, delivering touching father/son drama.

A driving musical score by Lorne Balfe, Harold Faltermeyer, and Hans Zimmer and ultra-loud sound effects will get audiences’ adrenalin pumping. By the time Lady Gaga sings the heart-warming theme song ‘Hold My Hand’ over the final credits, people will be leaving the theater emotionally spent. Especially the IMAX crowd.

Nicely done on most levels—and certainly on all the levels that matter. Tom Cruise still has game.