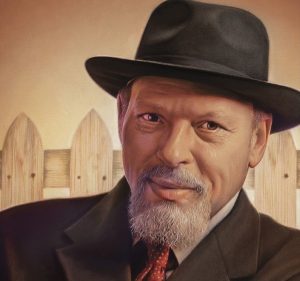 Close-up of the USPS August Wilson Forever stamp issued in 2021 by the United States Postal Service His play FENCES will be performed by Nashville Rep.

Nashville Rep announced its largest season in over 20 years last month. The Nashville Repertory Theatre 2022/2023 Mainstage Season features three musicals and three plays. The company’s 38th annual season explores the theme of family — the family you have, the family you choose, and the family you find.

“We are incredibly grateful for the support of our audiences and artists who were so eager to return after the pandemic shutdown,” said Drew Ogle, Executive Director of Nashville Rep.” Our comeback season played to full houses and standing ovations. This support is allowing us to program an even bigger season next year, and we couldn’t be more excited.”

The season will open in September with Jonathan Larson’s “Rent.” For a quarter of a century, “Rent” has inspired us to choose love over fear and to live without regret. Rent is about falling in love, finding your voice, and living for today. Winner of the Tony Award for Best Musical and the Pulitzer Prize for Drama, “Rent” has become a pop-cultural phenomenon, with songs that rock and a story that resonates with audiences of all ages. Based loosely on Puccini’s “La Boheme,” Jonathan Larson’s “Rent” follows a year in the life of a group of impoverished young artists and musicians struggling to survive and create in New York’s Lower East Side. How these young bohemians negotiate their dreams, loves and conflicts provide the narrative thread to this groundbreaking musical. Rent will be performed September 16 – 25, 2022 in TPAC’s James K. Polk Theater.

The second production of the season is the Nashville Premiere of “The Cake” by Bekah Brunstetter. Della’s North Carolina bakery is legendary, and her cakes are the best! She’s going to compete on the Great American Baking Show. When her best friend’s daughter returns from New York to get married and asks her to make her wedding cake, Della is overjoyed – until she realizes that there isn’t just one bride, but two. She can’t really bake a cake for such a wedding, can she? Della is forced to re-examine her deeply held beliefs and her own marriage. Faith, family, and frosting collide in this timely, funny, and thought-provoking new play. “The Cake” will be performed October 21 – 30, 2022 in TPAC’s Andrew Johnson Theater.

This holiday season, a Christmas favorite comes alive in “Elf the Musical.” Based on the hit holiday movie, Buddy mistakenly crawls into Santa’s bag of gifts and is transported to the North Pole. Raised as an elf, he is unaware that he is actually human until his enormous size and poor toy-making abilities cause him to face the truth. With Santa’s permission, Buddy embarks on a journey to New York City to find his birth father and discover his true identity. Faced with the harsh realities that his father is on the naughty list and his half-brother doesn’t even believe in Santa, Buddy is determined to win over his new family and help New York remember the true meaning of Christmas. Just like the 2003 New Line Cinema hit, Elf is a modern-day holiday classic sure to make everyone embrace their inner elf. After all, the best way to spread Christmas cheer is by singing loud for all to hear. “Elf the Musical” will be performed from December 21 – to January 1, 2023 in TPAC’s James K. Polk Theater.

The second half of the season begins with August Wilson’s classic “Fences.” Troy Maxson’s yard is his refuge. A sanctuary where, at long last, the grass is finally green. But it can always be greener, right? Troy’s story is both unique and universal — a portrait of the unsteady bridge between fathers and sons, and the wives and mothers who stand cheering for both sides while hanging their own dreams out to dry. A story strong enough to bear the weight of injustice and yearning and love, at its best and at its most destructive. And it’s bigger — it’s more — than all of that. “Fences” is a lyrical, heartbreaking love song sung in August Wilson’s unparalleled poetry, about people whose hearts beat vast and deep. August Wilson’s “Fences” will be performed March 3 – 5, 2023 in TPAC’s James K. Polk Theater.

Next on the Rep stage is “The Curious Incident of the Dog in the Night-Time,” based on the best-selling novel by Mark Haddon and adapted by Simon Stephens. 15-year-old Christopher has an extraordinary brain. He is exceptional at mathematics but ill-equipped to interpret everyday life. He has never ventured alone beyond the end of his road, he detests being touched, and he distrusts strangers. Now it is 7 minutes after midnight, and Christopher stands beside his neighbor’s dead dog, Wellington, who has been speared with a garden fork. Finding himself under suspicion, Christopher is determined to solve the mystery of who murdered Wellington. His detective work, forbidden by his father, takes him on a thrilling journey that upturns his world. Based on the bestselling novel and the Tony award-winning play, “The Curious Incident of the Dog in the Night-Time” is a thrilling, heartwarming, and uplifting adventure story for every one of us. “The Curious Incident of the Dog in the Night-Time” will be performed from March 24 – April 2, 2023, in TPAC’s Andrew Johnson Theater.

The season will close with Jeanine Tesori and Brian Crawley’s “Violet.” As a girl, Violet was struck by a wayward ax blade when her father was chopping wood, leaving her with a visible scar across her face. Now, she’s traveling across the Deep South in 1964 towards a miracle – the healing touch of a TV evangelist who will make her beautiful. Although she may not succeed in having the scar on her face healed, Violet may be able to repair those scars that are lying deeper than her skin. On the way, she meets a young soldier whose love for her reaches far past her physical “imperfections.” With a sweeping score by Jeanine Tesori (“Thoroughly Modern Millie,” “Shrek the Musical”), “Violet” is a powerhouse piece of theatre about healing and finding the beauty within. “Violet” will be performed May 12 – 22, 2023 in TPAC’s Andrew Johnson Theater.

Since 1985, Nashville Repertory Theatre has been Nashville’s premier regional theater, entertaining and inspiring audiences by creating exceptional theatre and exploring the diversity of human experience. Nashville Rep produces work designed, built, and rehearsed in Nashville, by highly skilled actors, designers, directors, and technicians, creating the highest quality professional productions and serving as a cultural, educational, and economic resource in Nashville and Middle Tennessee communities. Nashville Rep is committed to bringing classic and contemporary theatre to Nashville that inspires empathy and prods intellectual and emotional engagement in audiences.

Nichelle Nichols gone but not forgotten at age...

Titans to open preseason at Baltimore next Thursday