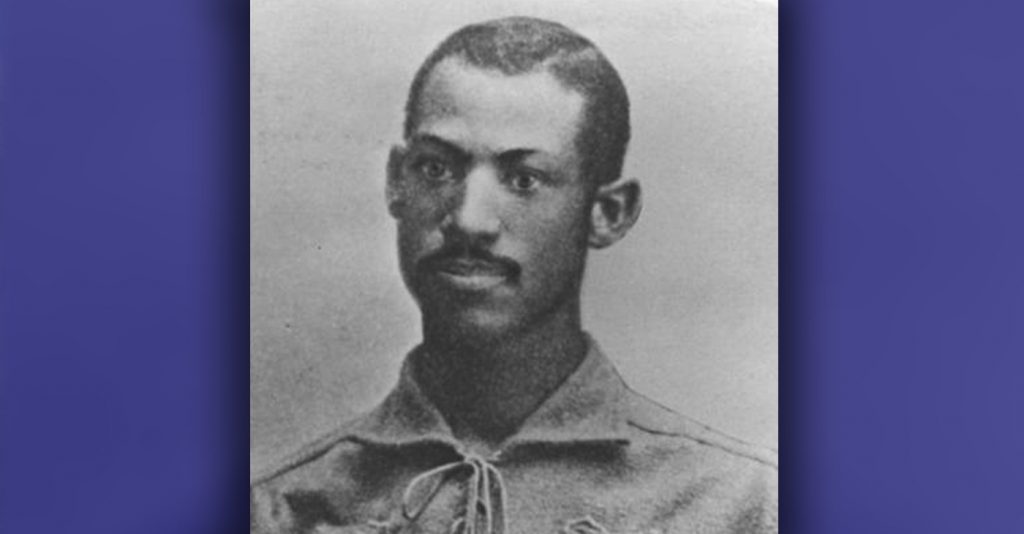 Moses Fleetwood Walker, circa 1884 (photo courtesy of the National Baseball Hall of Fame).

Some 63 years before Jackie Robinson is credited as the first African American in Major League Baseball (April 15, 1947), Moses Fleetwood Walker (1856–1924) became the true first to break the sport’s color barrier.

The American Association (today, the American League) was formed at the opening of the 1884 baseball season. Their goal was to be in competition with the National League. The Toledo Blue Stockings were added as one of the league’s participating franchises. The starting catcher would be Walker.

Walker took the field against the Louisville Eclipse on May 1, 1884, making him the first African American to play in a professional baseball game. According to baseball historians, it was the worst game of Walker’s career, as he went hitless in four at-bats and committed four errors.

Still, the native of Mount Pleasant, Ohio, and star athlete at Oberlin College went on to have a brief (September 1884) yet successful career with the Blue Stockings.

Walker was the last African American to participate on the major league level before Robinson.

Prior to the Blue Stockings, Walker played for semi-professional and minor league baseball clubs. But how Walker first came to the game is unknown. According to David W. Zang, Walker’s biographer, baseball was popular among children in Steubenville where he was raised. While in Oberlin’s preparatory program, Walker became the prep team’s catcher and lead-off hitter.

Oberlin men played baseball as early as 1865, including a “jet-black” first baseman whose presence suggested Walker was not the college’s first Black baseball player.

In 1891, he was involved in an altercation outside a saloon with a group of four White men exchanging racial insults. One of them hit Walker on the head with a stone. Walker then fatally stabbed his attacker with a pocketknife.

He surrendered to the police and was charged with second-degree murder but was later found not guilty. After, Walker returned to Steubenville where he had worked for the postal service.

Walker’s wife, Arbella, died in 1895. Three years later he was found guilty of mail robbery and sentenced to one year in prison, which he served in the Miami County and Jefferson County jails in Troy, Ohio.

After his release, he jointly owned the Union Hotel in Steubenville with his brother Weldy and managed the Opera House, a movie theater in nearby Cadiz, Ohio. Walker soon gained respect as a businessman in the community. Walker later patented inventions that improved film reels when nickelodeons became popularized. He was a staunch advocate of Black nationalism and jointly edited a newspaper, The Equator, with Weldy. He authored Our Home Colony to explore ideas about emigrating back to Africa.